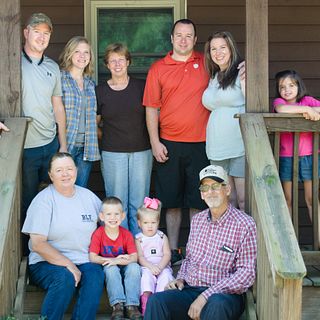 DENVER (July 13, 2017) – Blue Lake Farm in Sharon, S.C., has been selected as one of six regional honorees of the Environmental Stewardship Award Program (ESAP). The award, announced during the 2017 Cattle Industry Summer Business Meeting July 13, 2017, recognizes the operation’s outstanding stewardship and conservation efforts. This year’s regional winners will compete for the national award, which will be announced during the Annual Cattle Industry Convention in Phoenix, Ariz., in February 2018.

“Cattlemen and women everywhere understand that the land, air and water resources in their care are the cornerstone of their success and they are only stewards of those resources for a short time,” said National Cattlemen’s Beef Association President Craig Uden. “Each of us understands the importance of improving those resources and leaving them better for future generations. This year’s nominees are outstanding examples of what is possible for the beef industry and they serve as an inspiration for producers everywhere to continue improving their stewardship practices now and in the future.”

Blue Lake Farm is a multi-generational family farm that originated before the Civil War. Operated by the fifth and sixth-generations of the Thomson family, which consists of Rusty and wife Jessie and their son Rus and daughter-in-law Amy, as well as Rusty’s sister Harriet Thomson Farish, Blue Lake Farm is a 2,300-acre farm comprised of 550 acres in pasture, 25 acres in annual hay crops and 1,725 acres in timber. Blue Lake Farm is a diversified operation that includes 200 commercial cows, five turkey brooder houses, timber and leased hunting. It borders 4.3 miles of the Broad River.

“I came here in 1977 when I married in to the family,” said Jessie Thomson. “And immediately my husband and I got into row cropping and a couple of years later we got into cattle. So, we’ve been farming either on the side or in the last few years, full time.”

“We try to run around two hundred mama cows,” Rusty Thomson said. “We’re usually a little bit less than that because of culling and things like that but we try to stick around that two hundred mark. And we have two loads of cattle primarily from that two hundred cow operation and we sell the best and feed the rest. And we’ve done really well over the years with the cattle that go to the feed lot as well as the cattle that we sell here off the farm.”

The Thomsons use fenced steam buffers to prevent erosion, manage runoff and provide a habitat for wildlife. No livestock or motorized vehicles have access to the stream banks or riparian buffers. To help them move cattle across the stream, the Thomson family built three hardened stream crossings. They improve their cattle genetics through the use of artificial insemination, carcass data from steers, and DNA tests on heifers, which helps them make better decisions in their herd.

The cattle of Blue Lake Farm rotationally graze through 30 pastures, all with supplemental water sources – 43 troughs fed from well and two troughs gravity-fed from farm ponds. The fences on the farm are high tensile electric fences, with 50 percent powered by solar chargers. Turkey litter serves as a fertilizer source, which reduces expenses in pastures, permanent hay fields and no-till annual hay crops. To assist with wildlife, the Thomson family plants 20 food plots each year. They also lease hunting for deer and turkey on the farm to three hunting clubs.

Blue Lake Farm in Sharon, S.C., is a multi-generational family farm that has been around since before the Civil War. Blue Lake Farm is operated by Rusty Thomson, wife Jessie and their son Rus and daughter-in-law Amy, along with Rusty’s sister Harriet Thomason Farrish. This fifth and sixth generation farm is a wide-rangingoperation that utilizes numerous stewardship techniques.

“Probably the biggest thing is they added the water troughs and the pipelines,” said Scott Glenn, a field engineer for NRCS, “and in conjunction with that, fencing out the surface water so that the cows can’t get in to the creeks and the streams. Therefore, it keeps the surface water clean and the cows have clean water to drink.”

“The desire to leave the land better than they found it is a common trait among cattle raisers,” says Dave Owens, beef marketing specialist with sponsor Dow AgroSciences. “You certainly see that in action in the Thomson family. They’re making a real, on-the-ground difference in protecting and improving the environment.”

Jessie Thomson said everything on Blue Lake Farm works together in a cycle. Their turkey operation is just one way that everything in the farm fulfills a need by providing not only income, but also a consistent source of turkey litter as fertilizer. “The time we need to put out litter is the time we need it on our pastures or on our hay fields and the cattle harvest the grass and it seems to just work perfect together,” he said. 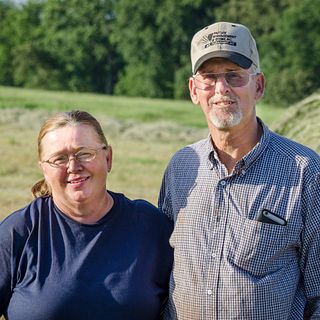 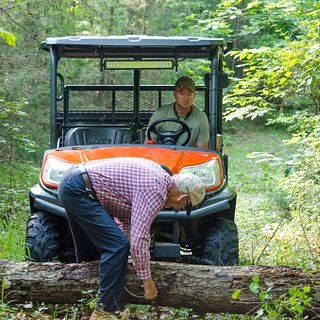 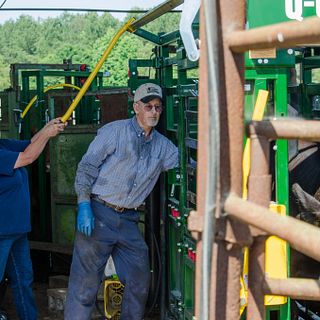 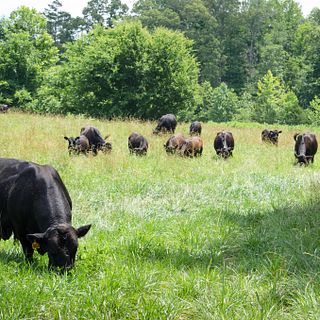 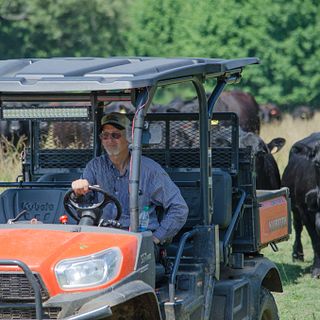